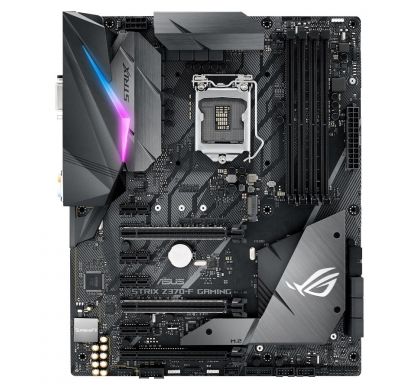 With aesthetics inspired by the sharpest blades and premium colorways to match any mood, the all-new ROG Strix Z370 motherboards are ready to do battle - and infused with all the essential ROG engineering needed to push performance as far as you dare. Ready for the latest 8th Generation Intel® Core™ processors, ROG Strix Z370-F Gaming is loaded with overclocking and cooling innovations to keep your gaming rig's thermals in check as you turn up the clock. Factor in custom Aura RGB illumination and superior SupremeFX audio and you'll know that ROG Strix Z370-F Gaming looks great and sounds amazing - and outperforms every expectation to dominate your game!

ROG Strix Z370-F Gaming looks as good as it performs, with built-in RGB illumination and support for 3D-printed parts, it's perfect for the style-conscious part of your personality!

A well-tuned system deserves a matching aesthetic. ASUS Aura offers full RGB lighting control with a variety of functional presets for the built-in RGB LEDs as well as strips connected to the onboard RGB headers. And it can all be synced with an ever-growing portfolio of Aura-capable hardware.

ROG Strix Z370-F Gaming features a pair of onboard 5050 RGB headers and an addressable RGB header that can be connected to compatible lighting strips, fans, coolers, and PC cases, creating a new world of illumination possibilities.

Cable Cover
Cover your cables for a tidier PC.

Custom Nameplate
Personalize your build with a custom logo making it unique to you.