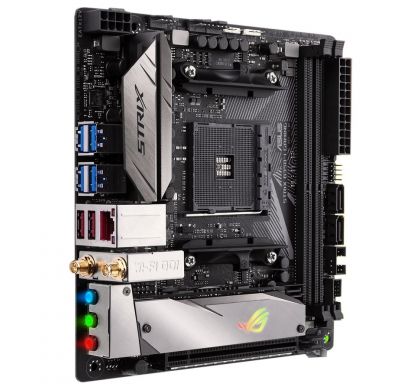 ROG Strix B350-I Gaming draws on the proud legacy of our renowned Pro Gaming series by packing acclaimed ROG innovations into a mini-ITX motherboard that's as sleek, small and stylish as it is powerful - ready for you to create a gaming rig that rivals anything built around a bigger board! Experience the all-new ROG M.2 Audio Combo Card that both frees up space and delivers crystal-clear audio, push performance to the limits with 5-Way optimization, and up the aesthetic ante with Aura Sync illumination. Join the Republic with ROG Strix B350-I Gaming and dominate your game!

ROG Strix SupremeFX audio has levelled up, delivering an exceptional 113dB signal-to-noise ratio on the line-in connection, and 120dB on the line-out for crystal-clear recording and playback. We've also added a low-dropout regulator for cleaner power delivery to the SupremeFX S1220A codec, plus Texas Instruments® RC4580 and OPA1688 op-amps for high gain with low distortion. It all adds up to audio that envelops you as never before.

One op amp adds voltage gain while the other works as a buffer. Together, they're capable of driving 32-600Î© headphones effortlessly.

Backlit audio jacks save you from fumbling around in the dark.

Sonic Studio now supports HRTF-based (head-related transfer function*) virtual surround for VR headsets, casting an immersive aural landscape that draws you deeper into the action. The intuitive Sonic Studio interface also offers a range of EQ options, allowing you to tailor acoustics to suit personal preferences or the characteristics of your headset.

Sonic Radar III is all new - with an evolved audio engine that processes sounds more accurately than ever, ensuring you're always aware of what's going on around you. A new on-screen arrow has also been added to help you pinpoint the enemy position instantly!