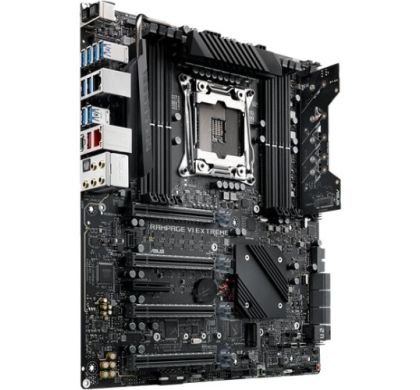 A well-tuned enthusiast system deserves a matching aesthetic. ASUS Aura offers full RGB lighting control with a variety of functional presets for the built-in RGB LEDs as well as strips connected to the onboard RGB headers. And it can all be synced with an ever-growing portfolio of Aura-capable ASUS hardware.

Rampage VI Extreme features a duo of onboard 5050 RGB headers and an addressable header that can be connected to compatible lighting strips, fans, coolers, and PC cases, creating a new world of illumination possibilities.

ASUS Aura SDK allows developers to take full advantage of the vast eco-system of Aura Sync-capable PC gear. From in-system illumination to peripherals and beyond, the SDK provides an evolving toolkit of options to enhance games and software with RGB lighting. Game effects, alerts, and audio can all be portrayed via Aura-compatible hardware, creating subtle or dazzling visual cues to augment the action. There's also scope to map system parameters such as temperatures to lighting, giving enthusiasts new ways to monitor vital information.