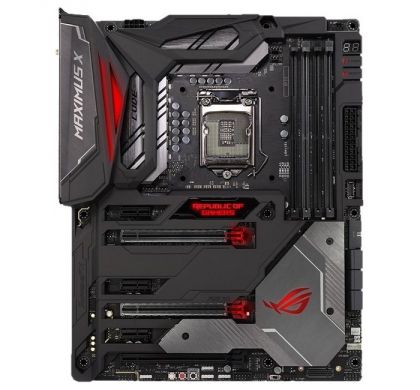 Drawing from a heritage that spans more than a decade, the latest incarnation of the Maximus series augments Intel's Z370 chipset with all the enhancements that enthusiasts crave. Each model sports a unique blend of features to cater to a distinct audience, yet the core ROG DNA ripples through the entire lineup. From overclocking and cooling options to satiate die-hard fanatics, to clean, refined aesthetics that are tastefully accented by RGB lighting, Maximus X-series motherboards bring the octane to your build.

ASUS Aura offers full RGB lighting control with a variety of functional presets for the built-in RGB LEDs as well as strips connected to the onboard RGB headers. And it can all be synced with an ever-growing portfolio of Aura-capable ASUS hardware.

Maximus X Code features a pair of onboard 5050 RGB headers and a pair of addressable headers that can be connected to compatible lighting strips, fans, coolers, and PC cases, creating a new world of illumination possibilities.

ASUS Aura SDK allows developers to take full advantage of the vast eco-system of Aura Sync-capable PC gear. From in-system illumination to peripherals and beyond, the SDK provides an evolving toolkit of options to enhance games and software with RGB lighting. Game effects, alerts, and audio can all be portrayed via Aura-compatible hardware, creating subtle or dazzling visual cues to augment the action. There's also scope to map system parameters such as temperatures to lighting, giving enthusiasts new ways to monitor vital information.

ROG Maximus X Code is equipped with a stylish, angular M.2 heatsink that keeps your SSD cool. By efficiently dissipating heat away from the M.2 area, ROG Maximus X Code minimizes the possibility of the performance-sapping throttling that can happen when drives become too warm. The heatsink's angular design adds an eye-catching touch to any build, while the T-sensor detects temperatures in the vital M.2 area for instant monitoring.

Rog Maximus X Code Is Engineered With 2X2 Dual-Band 2.4/5Ghz Antennas For Up To 867Mbps transfer speeds - and the very latest Multi-User MIMO (MU-MIMO) technology to ensure that every connected user experiences the best wireless and online speeds!