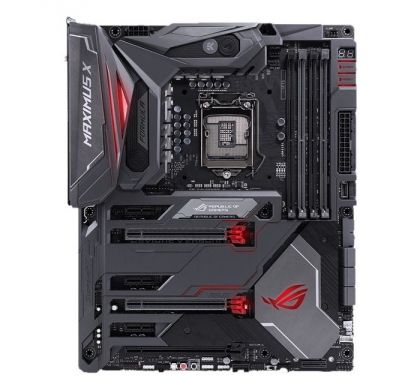 Drawing from a heritage that spans more than a decade, the latest incarnation of the Maximus series augments Intel's Z370 chipset with all the enhancements that enthusiasts crave. Each model sports a unique blend of features to cater to a distinct audience, yet the core ROG DNA ripples through the entire lineup. From overclocking and cooling options to satiate die-hard fanatics, to clean, refined aesthetics that are tastefully accented by RGB lighting, Maximus X-series motherboards bring the octane to your build.

Generation after generation, ROG takes the Maximus Formula to new heights. Follow its evolution, from inception, all the way to the latest incarnation.

ROG Maximus X Formula is equipped with an M.2 heatsink integrated into the PCH heatsink. With a huge cooling surface, the heatsink perfectly chills an inserted M.2 SSD - for maximum performance and reliability. Featuring a stylish angular design replete with an awesome glowing ROG eye logo, the heatsink adds a beautiful touch to the build, while the T-sensor allows you to connect a thermal probe and monitor M.2 drive temperatures in real time.

Maximus X Formula is equipped with LiveDash, a built-in 1.3" OLED panel that displays useful information and customizable graphics. During the power-on, self-test (POST) phase, LiveDash shows key progress stats in simple language and via traditional POST codes. Then, during normal operation, the panel shows a choice of CPU frequency, device temperatures, fan speeds or information from the Water Cooling Zone. You're even able to customize the default LiveDash GIF, so that it'll display your own image or animation.

ASUS Aura offers full RGB lighting control with a variety of functional presets for the built-in RGB LEDs as well as strips connected to the onboard RGB headers. And it can all be synced with an ever-growing portfolio of Aura-capable ASUS hardware.

Maximus X Formula features a pair of onboard 5050 RGB headers and a pair of addressable headers that can be connected to compatible lighting strips, fans, coolers, and PC cases, creating a new world of illumination possibilities.